The entire world is being disrupted.  Readers of this narrative know this.  Here is the latest disruption: vertical warehouses with four stories. Why are these taking off?

–Consumer demand for instantaneous delivery has caused the industry to take a hard look at the “last mile” and seek new ways to speed up delivery.
–Developers are looking to Asia and cloning their multi-tier warehouses and bringing them to a city near you.

Below is a great article on this trend. Here is another if you want to read more.

Currently, the ideal locations for these warehouses are:

The whole supply chain is being remade, this is just one way it’s manifesting itself.

To discuss these disruptions further, feel free to give me a call. 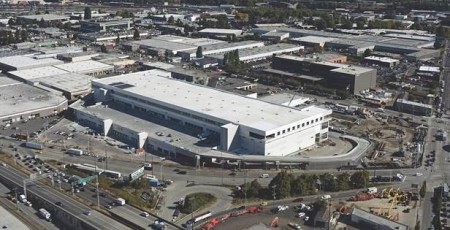 “Ecommerce needs three times the space of any other kind of retailing.”

That observation came from Hamid Moghadam, CEO of Prologis, the world’s largest warehouse owner and developer, during a March 14, 2017, interview with Jim Cramer on the TV business program Mad Money.

That same month, Prologis paid a reported $28.3 million to acquire a 205,409-sf former ABC Carpet & Home outlet in The Bronx, N.Y., which Prologis converted into the first multistory distribution center in the eastern U.S.

Online sales pivot on distribution. Consumers who purchase merchandise from their desktop computers or mobile devices have high expectations about quick and reliable delivery. As ecommerce approaches an estimated 12.4% of retail sales by 2020, it is imperative for distribution centers (DC) to be near where consumers live, especially in cities whose transportation infrastructure did not anticipate exponentially more delivery trucks.

But close-in urban real estate is expensive and often difficult to come by for the massive acreage that these DCs require. So some developers are taking a fresh look at building warehouses vertically, and justifying the added cost by the rents these facilities might fetch.

Ware Malcomb, in collaboration with developers DH Property Holdings and Goldman Sachs Asset Management, has designed a 375,000-sf, three-story warehouse on four acres in the Red Hook section of Brooklyn, N.Y., whose construction (by design-builder Hollister Construction Services) was expected to begin in January 2019, with completion scheduled for early 2020. (The developers paid nearly $50 million for this land, according to The Real Deal.

The Red Hook facility, at 640 Columbia Street, is one of five multistory warehouses in New York City that Ware Malcomb is involved in various stages of production, confirms Michael Bennett, LEED AP, Principal with the firm’s Woodbridge, N.J., office. 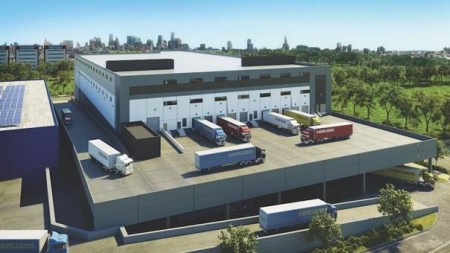 Ware Malcomb’s three-story warehouse in the Red Hook section of Brooklyn, N.Y., is one of five it has under development.

LAND COSTS DRIVE VERTICALITY
While still a rarity in North America, multistory warehouses are common in Asia, where land costs are prohibitive and smaller trucks are used to ship products. Through October 2018, Prologis had opened 84 multistory warehouses in Asia, and has another 25 under construction, according to Rick Kolpa, Senior Vice President and Market Officer in the firm’s Seattle office.

The attraction of multistory warehouses to American developers corresponds with the doubling over the past five years of land prices for single-story warehouses in the U.S. Spurred by ecommerce, demand for industrial real estate exceeded supply for 32 consecutive quarters through mid-2018, according to CBRE.

Meeting those expectations is problematic to achieve, however, as America’s aging infrastructure deteriorates, with one result being intractable traffic congestion.

“Acceptable routes of delivery are diminishing,” laments Kolpa. Quicker delivery increasingly depends on the proximity of warehouses to the product’s destination, the so-called “last mile.” But finding closer-in land within some urban cores with enough acreage to support a single-story distribution center has become exceedingly hard—and expensive.

“At some point, there’s a need for an urban distribution solution, and multistory warehouses seem to be the logical fit,” says Ed Klimek, AIA, NCARB, Partner with KSS Architects, which designed a 700,000-sf, two-story warehouse that is expected to start construction in March 2019 on a 20-acre site along Bruckner Boulevard in The Bronx. Its developers Innovo Property Group and Square Mile Capital Management reportedly paid $75 million for the parcel.

Situated at a six-way interstate intersection with highway access to port and city, this building, when completed in late 2020, would be 15 minutes from 9.4 million residents. The design includes 28- to 32-foot ceiling heights, a two-lane ramp, a 130-foot truck court, 90 loading docks, 800-lb floor load capacity, a fenced perimeter, and onsite parking with 486 spaces. The building will also offer 55,000 sf of corporate office space.

“Innovo wanted something that would maximize the land, optimize the building, and would be adaptable for single and multiple tenants,” says Scot Murdoch, AIA, Partner at KSS.

In designing the facility, KSS and its development partners took into account the business audience, the state building codes for entrance and egress, the balance between total square footage and the number of truck docks needed, and even how to skin the building (its façade blends precast panels below and heavy-metal panels above).

Prologis, says Kolpa, hasn’t found much difference in the construction cost of multi- vs. single-story warehouses. (Prologis hasn’t revealed the cost for Georgetown Crossroads in Seattle). But Bennett of Ware Malcomb says the cost for a multistory warehouse in New York would run anywhere from $185 to $280 per sf, depending on how its rentable space is defined. That compares to a construction cost of between $60 to $110 per sf for a comparably located single-story warehouse.

Without revealing numbers, KSS’s Klimek and Murdoch say their cost estimates pencil out within Bennett’s range. 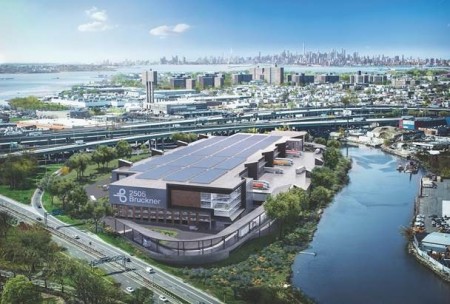 KSS Architects has designed a two-story, 700,000-sf distribution center, 2505 Bruckner Boulevard, that could get started in 2019.

BETTER LOCATION, HIGHER RENTS?
Multistory warehouses nearer to urban centers are expected to be able to charge higher rents, although proof of that theory is still anecdotal.

Bennett believes higher rents can be justified by emphasizing that a vertical warehouse “provides tenants with a Class A opportunity, closer in.” He also notes that such warehouses are nearer job centers at a time when warehouse tenants in general are having a harder time hiring and retaining workers.

What makes a multistory warehouse unique, says Bennett, is its “stacking and ramping” features that can handle 53-foot trailers. Ware Malcomb’s design also “future proofs” the building so that it can accommodate “vertical transportation” elements like robotic rovers for picking and drones for delivery. The façade will include solar panels to get the building as close to net zero energy consumption as possible. And its layout will be flexible enough to convert to more office space if warranted. Bennett anticipates that Red Hook’s third floor will be leased primarily for light manufacturing.

Prologis’s Seattle warehouse is equally flexible on each of its three floors, which can be subdivided. Its first two floors, with 24-foot and 28-foot clear space, respectively, have up to 100 dock-high doors available. The third floor is for build-to-suit office and maker spaces.

Kolpa was reticent about discussing where else Prologis is looking to build multistory warehouses. He would only confirm that a facility in San Francisco is “pending.”

It remains to be seen how broadly developers embrace this concept, particularly in markets like Texas where land is still plentiful and relatively affordable.

JLL reported last spring that a large parking lot near New York’s John F. Kennedy International Airport was in the planning stage to become a three-story warehouse. And KSS has two warehouse projects in the works in Washington, D.C., one of which would be multistory. 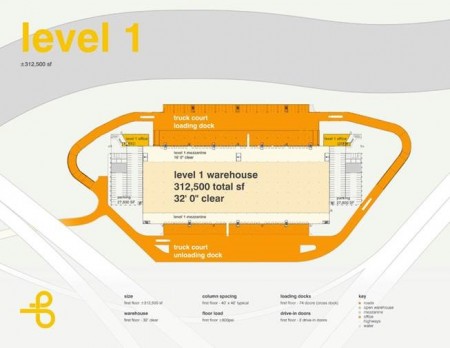 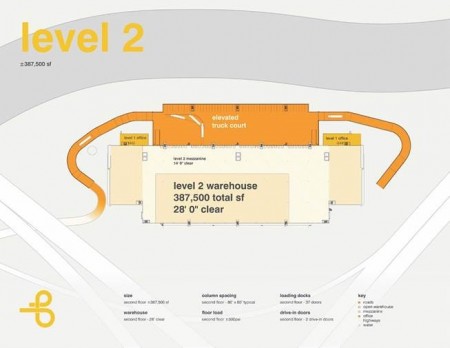 The 2505 Bruckner Boulevard facility has 74 loading dock doors on the first level, with the second level for freight and office space.