We have talked a lot about open offices and collaborative work spaces in this narrative. Today’s article discusses the latest buzzword, Collaboration.  While collaboration is important, the real question is:  At what cost? The below article succinctly lays out the disadvantages of collaboration in the office.

This doesn’t mean collaboration should be avoided. There are still benefits to working with people with different ideas and skillsets. But like with anything, the key is for companies to find a good balance in their offices.

To find out how we achieved this with our recent office remodel at Lee & Associates, give me a call.

PS- Good news! Arizona was recently named #2 on a list of states with the fastest job growth in 2016. To read the full article, click here.

The Collaboration Curse
The fashion for making employees collaborate has gone too far. 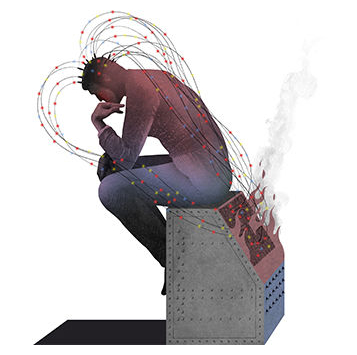 IN MODERN business, collaboration is next to godliness. Firms shove their staff into open-plan offices to encourage serendipitous encounters. Managers oblige their underlings to add new collaborative tools such as Slack and Chatter to existing ones such as e-mail and telephones. Management thinkers urge workers to be good corporate citizens and help each other out all the time.

The fashion for collaboration makes some sense. The point of organisations is that people can achieve things collectively that they cannot achieve individually. Talking to your colleagues can spark valuable insights. Mixing with people from different departments can be useful. But this hardly justifies forcing people to share large noisy spaces or bombarding them with electronic messages. Oddly, the cult of collaboration has reached its apogee in the very arena where the value of uninterrupted concentration is at its height: knowledge work. Open-plan offices have become near-ubiquitous in knowledge-intensive companies. Facebook has built what is said to be the world’s biggest such open space, of 430,000 square feet (40,000 square metres), for its workers.

Hitherto, knowledge workers have largely suffered in silence or grumbled in private because their chances of promotion have come to be influenced by their willingness to collaborate. But a backlash is setting in: the current Harvard Business Review (HBR) has a cover story on “collaborative overload”; and Cal Newport of Georgetown University has just brought out a book called “Deep Work: Rules for Focused Success in a Distracted World”.

A growing body of academic evidence demonstrates just how serious the problem is. Gloria Mark of the University of California, Irvine, discovered that interruptions, even short ones, increase the total time required to complete a task by a significant amount. A succession of studies have shown that multitasking reduces the quality of work as well as dragging it out. Sophie Leroy, formerly of the University of Minnesota (now at the University of Washington Bothell) has added an interesting twist to this argument: jumping rapidly from one task to another also reduces efficiency because of something she calls “attention residue”. The mind continues to think about the old task even as it jumps to a new one.

A second objection is that, whereas managers may notice the benefits of collaboration, they fail to measure its costs. Rob Cross and Peter Gray of the University of Virginia’s business school estimate that knowledge workers spend 70-85% of their time attending meetings (virtual or face-to-face), dealing with e-mail, talking on the phone or otherwise dealing with an avalanche of requests for input or advice. Many employees are spending so much time interacting that they have to do much of their work when they get home at night. Tom Cochran, a former chief technology officer of Atlantic Media, calculated that the midsized firm was spending more than $1m a year on processing e-mails, with each one costing on average around 95 cents in labour costs. “A free and frictionless method of communication,” he notes, has “soft costs equivalent to procuring a small company Learjet.”

Mark Bolino of the University of Oklahoma points to a hidden cost of collaboration. Some employees are such enthusiastic collaborators that they are asked to weigh in on every issue. But it does not take long for top collaborators to become bottlenecks: nothing happens until they have had their say—and they have their say on lots of subjects that are outside their competence.

The biggest problem with collaboration is that it makes what Mr Newport calls “deep work” difficult, if not impossible. Deep work is the killer app of the knowledge economy: it is only by concentrating intensely that you can master a difficult discipline or solve a demanding problem. Many of the most productive knowledge workers go out of their way to avoid meetings and unplug electronic distractions. Peter Drucker, a management thinker, argued that you can do real work or go to meetings but you cannot do both. Jonathan Franzen, an author, unplugs from the internet when he is writing. Donald Knuth, a computer scientist, refuses to use e-mail on the ground that his job is to be “on the bottom of things” rather than “on top of things”. Richard Feynman, a legendary physicist, extolled the virtues of “active irresponsibility” when it came to taking part in academic meetings.

Why have organisations been so naive about collaboration? One reason is that collaboration is much easier to measure than “deep work”: any fool can record how many people post messages on Slack or speak up in meetings, whereas it can take years to discover whether somebody who is sitting alone in an office is producing a breakthrough or twiddling his thumbs. The more junior the knowledge worker is, the more likely he is to spend his time doing things that are easy to measure rather than engaging in more demanding but nebulous work. A second reason is that managers often feel obliged to be seen to manage: left to their own devices they automatically fill everybody’s days with meetings and memos rather than letting them get on with their work.

What can be done to restore balance in a world gone collaboration-mad? Few people have the freedom of a Franzen or a Feynman to unplug themselves from the world. But employees—particularly young ones—need to recognise the long-term costs of working in a constant state of distraction. The HBR article points out that there is an overlap of only 50% between “the top collaborative contributors in any organisation and those individuals deemed to be the top performers.” About 20% of company stars keep themselves to themselves. So organisations need to do more to recognise that the amount of time workers have available is finite, that every request to attend a meeting or engage in an internet discussion leaves less time for focused work and that seemingly small demands on people’s time can quickly compound into big demands. Helping people to collaborate is a wonderful thing. Giving them the time to think is even better.