I’m adding to my narrative two weeks ago (click here to read) on the effects of open office plans.  Today is not about the science but rather the complaining and emotional impact on employees after moving to open office space.  I’m not taking a side, rather just piling on more information from two weeks ago.

Workers are simply not as happy in open spaces. They are 15% less productive (depending on the type of work), more likely to get sick, and more.  This is interesting. Some people want open collaborative space and others beg for an office where they can “get my work done”.  This is exacerbated by the fact that your best team players are probably getting recruited by other companies who might be offering them an alternative.

The workforce is in a major shift in demographics and what do new workers (millennials and Gen X) really want?  Who knows anymore?   Based on our experience completing 125 leases every year, I can say with conviction that—it depends. Here are a few of the questions we ask our clients as we begin the process and to set direction:

1—How do you and specifically your teams work?  What type of work is being done and what is the need for interaction?
2—Who is your best cohort you hire?  Where do you get them from and why?  What is your turnover rate and why?
3—What happens in a recession? (During recessions, businesses fight to stay in business and cutting costs becomes more urgent.)
4—What do you have now?  What works and what doesn’t?

I won’t continue to harp on this topic.  I just thought I would spend a couple narratives looking at open office from a different perspective. Has the pendulum swung too far to open offices with over 70% of all offices now open?  What are your thoughts?  Let me know.

ccoppola@leearizona.com
Why open offices are bad for us
By Bryan Borzykowski 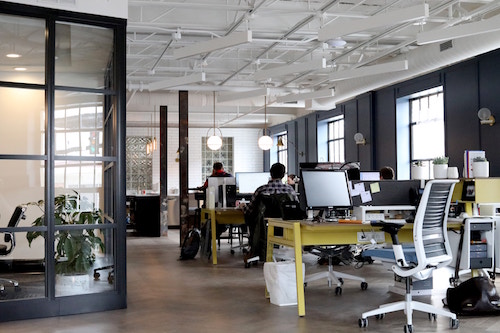 Four years ago, Chris Nagele did what many other technology executives have done before — he moved his team into an open concept office.

His staff had been exclusively working from home, but he wanted everyone to be together, to bond and collaborate more easily. It quickly became clear, though, that Nagele had made a huge mistake. Everyone was distracted, productivity suffered and the nine employees were unhappy, not to mention Nagele himself.

In April 2015, about three years after moving into the open office, Nagele moved the company into a 10,000-square foot office where everyone now has their own space — complete with closing doors.

We’re 15% less productive, we have immense trouble concentrating and we’re twice as likely to get sick in open working spaces

Numerous companies have embraced the open office — about 70% of US offices are open concept — and by most accounts, very few have moved back into traditional spaces with offices and doors. But research that we’re 15% less productive, we have immense trouble concentrating and we’re twice as likely to get sick in open working spaces, has contributed to a growing backlash against open offices.

Since moving, Nagele himself has heard from others in technology who say they long for the closed office lifestyle. “Many people agree — they can’t stand the open office,” he says. “They never get anything done and have to do more work at home.”

It’s unlikely that the open office concept will go away anytime soon, but some companies are following Nagele’s example and making a return to private spaces.

The more focus the better
There’s one big reason we’d all love a space with four walls and a door that shuts: focus. The truth is, we can’t multitask and small distractions can cause us to lose focus for upwards of 20 minutes.

What’s more, certain open spaces can negatively impact our memory. This is especially true for hotdesking, an extreme version of open plan working where people sit wherever they want in the work place, moving their equipment around with them.

We retain more information when we sit in one spot, says Sally Augustin, an environmental and design psychologist in La Grange Park, Illinois. It’s not so obvious to us each day, but we offload memories — often little details — into our surroundings, she says.

We retain more information when we sit in one spot

These details — which could be anything from a quick idea we wanted to share to a colour change on a brochure we’re working on — can only be recalled in that setting.

We don’t collaborate like we think
For many of us, it’s the noise that disturbs us the most. Professors at the University of Sydney found that nearly 50% of people with a completely open office floorplan, and nearly 60% of people in cubicles with low walls, are dissatisfied with their sound privacy. Only 16% of people in private offices said the same.

They asked people in various office types how dissatisfied they were with their space  and in 14 different respects, including temperature, air quality and sound privacy, closed fared better than open.

Beside the cheaper cost, one main argument for the open workspace is that it increases collaboration. However, it’s well documented that we rarely brainstorm brilliant ideas when we’re just shooting the breeze in a crowd. Instead, as many of us know, we’re more likely to hear about the Christmas gift a colleague is buying for a family member, or problems with your deskmate’s spouse.

And it turns out our best work is done when we have total focus, says Augustin. We can work in a busy space, but the final product won’t be as good as if we are in a quiet locale.

“[It’s] inefficient,” she says. “It’s a shame to waste people by not giving them a place that supports what they actually do.”

Of course, she says, it’s important for us to bond and to get to know each other. But there are plenty of ways to bond in closed offices. Nagele’s team, for instance, eats lunch together every day. A few ideas come out of lunch time chats, he says, but most are developed from more focused brainstorming sessions.

Finding the right balance
For jobs that require focus,  like writing, advertising, financial planning and computer programming, some companies that aren’t ready to ditch open plans are experimenting with quiet rooms and closed spaces.

The trouble with that, is some of us don’t feel comfortable leaving the team to go off on our own—it can feel as if we’re not pulling our weight if we’re not present. That’s particularly true in high-pressure environments. Some of us even feel that escaping to a quiet room is a sign of weakness, Augustin says.

Other companies are creating closed spaces for smaller teams. Ryan Mullenix, a partner with NBBJ, a global architecture firm, has worked with tech firms that have built offices for between three and 16 people.

They can still collaborate, but they can also block out noise from other teams of people they don’t need to hear from. Technology can also help. Mullenix’s own office has sensors, placed 10 feet apart, that can track noise, temperature and population levels. Staff can log on to an app and can find the quietest spot in the room.

Against the grain
Some of us thrive in open offices. Those who do repetitive tasks represent one group. Another: more junior employees. For them, it’s easier to learn by watching how others work. If new-to-work staff get their own office from the start, they may lose focus and perform at a lower level, Augustin says.

The bad news for unhappy open-office dwellers: the concept isn’t going away any time soon.  But, says Nagele, more companies should consider what he’s found. His employees are happier and more productive—and that helps not just the company, but the team.

“People can now do focused work and they have more time to work,” he says. “That’s helped everyone’s mindset.”