No recovery is smooth. There are fits and starts. There are blue skies and cloudy. The Phoenix housing market, which in past years has driven the office market, has cooled off and is pulling back. Nobody thinks this will be a full recession, but there are clear signs that all is not peachy in Phoenix. I believe this to be true in most markets. Job creation, still anemic, is what drives people to buy and the job market is still lagging. See below for some key data, a few highlights, and some anecdotal stories from the trenches.

I remain bullish….We need continued and sustained job growth to bring the market back.

In Phoenix, a Realty Check as Market Moderates
From Bust to Rebound to a Return to Normal as Sales Cool 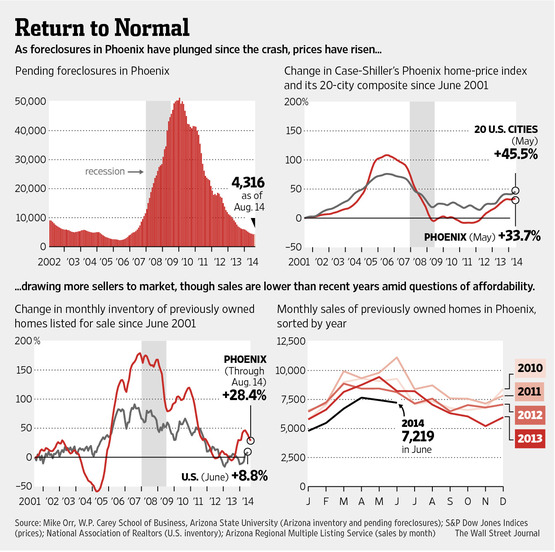 To understand why the U.S. housing market this year isn’t providing the lift many economists expected, look to Phoenix.

Among the cities most battered by the 2006 bust, Phoenix was the first to snap back in 2011. Prices, off by 56% from peak, then rebounded sharply, trimming that drop by a third. The number of homes in some stage of foreclosure has fallen to about 4,300 today from more than 50,000 four years ago.

Now, prices and sales are cooling off. Inventories of homes listed for sale have climbed to their highest level in three years while the number of houses sold in June fell 12% from a year earlier. The rebound during the past two years “gave people a false sense of how quick we would recover,” said Jim Belfiore, who runs a local home-builder consulting firm.

Sales in other once-hot markets also are slowing. Inventories in Washington, D.C., rose by a third in July from a year earlier, while sales were down 8%. Listings in Sacramento were up 44%, as sales dropped 11%. In Las Vegas, sales slid 10%, while the number of listings without offers rose 53%.

Economists predicted double-digit gains in home sales nationally this year would help spur economic growth, but sales are down more than 5% over last year.

“There appears to be a conservatism among consumers and their willingness to take on big-ticket purchases,” said Doug Duncan, chief economist at Fannie Mae, whose view of the housing market has deteriorated recently. In a report Monday, Fannie cut its national housing forecasts for this year and next.

Fannie now expects new-home sales of 431,000 this year, down 11% from last month’s forecast, which would represent a gain of just 0.6% from last year.

While activity is expected to pick up next year, it still won’t be “the breakout year some are expecting,” said Mr. Duncan, who cut the 2015 forecast for new-home sales by 14%.

As the foreclosure boom that fueled much of the recovery fades, income and population growth are reasserting themselves as drivers of the housing market in places such as Phoenix.

Meanwhile, lingering scars from the bust are playing out as some of the country’s hottest housing markets struggle to pass the baton from bargain-hunting investors, who typically pay cash, to traditional buyers with mortgages.

The good news in Phoenix, as across much of the country, is that the foreclosure crisis largely has faded. That drop-off was a big driver behind the surge in prices as more buyers, especially investors, chased fewer homes. Rising prices have led homeowners to test the market and investors to retreat, a trend playing out nationally.

Home prices are up nearly 46% from the 2011 low. Investors accounted for nearly 15% of homes bought in June, down from about one-quarter last year and one-third of sales in June 2012, according to Mike Orr of Arizona State University’s W.P. Carey School of Business.

In Phoenix, slow job and income growth are among the reasons builders aren’t benefiting from the drop-off in foreclosures, especially as investors and foreign buyers have pulled back.

Employment in Phoenix, after expanding at an average annual pace of 2.6% and 2.8% in each of the last two years, is up just 1.5% so far this year, state figures show.

The sluggish local economy is compounded by consumers still too battered from the bust to think about getting a loan. Some don’t have sufficient equity to turn a house sale into an adequate down payment on their next purchase. Others suffered credit blemishes or income hits that make banks reluctant to lend.

“It is taking longer for folks who went through the downturn to re-emerge,” Mr. Belfiore said. “Traffic at new-home developments is strong, he said, but “people are not pulling the trigger.”

David O’Hagan needed three months and two price reductions to find a buyer for his five-bedroom home in the Phoenix suburb of Peoria. The sale is set to close this week for about 5% less than the $259,000 he initially asked, though in four years he will have turned a sizable profit.

“I had hoped to see more traffic. It was a little disappointing,” said Mr. O’Hagan, who is a transportation manager for a food company and is moving his family to Maine.

Phoenix stands in contrast to other cities such as Houston, Dallas and San Francisco, where better job growth is fueling stronger demand.

Mr. O’Hagan, 39 years old, recently sold a separate rental home in a Dallas suburb in just days after 65 buyers showed an interest. It was “a complete polar opposite” from Phoenix, he said.

The increase in inventory has been great news for buyers like Rose Eltanal, a 39-year-old attorney who started house hunting in 2010, but twice shelved her search. Last month she negotiated to buy a four-bedroom ranch-style home, initially listed at $599,000, for $515,000. She says she was tired of “throwing the money away” on rent.

Some early investors, meanwhile, are cashing out.

Jon Mirmelli, a real-estate agent, last year sold seven homes he had acquired since 2010 as rentals. He is now selling two dozen more homes for a national investor that he declined to name.

But he doesn’t see a big risk of further price declines because other investors are still combing the desert for deals. The discounts of years past are “something I’m not going to see again in my lifetime,” he said. “We have a normal market again.”