Several weeks ago, I talked about the PC 16 (please click here for the narrative) and how Mexico was one of the 16. I grew up in Sierra Vista, Arizona less than 20 miles from the Mexican border. I follow Mexican manufacturing, its economy and the maquiladora program very closely. The 50 year old maquiladora program allows a factory in Mexico, run by a foreign company, to export its products to the country of that company.

Mexico is positioned so strategically to generate a huge industry in electronics and other manufacturing businesses. Below is an older article from The Economist. A LOT has to change in Mexico for the country to take advantage of this opportunity, but I am hopeful.

This is not a sales pitch, but Mexico has:
–a strategic location to the U.S.
–50 years of cross border work
–NAFTA

See my yellow highlights below for some issues that arise when doing business in Mexico. There’s opportunity and some drawbacks.

P.S. We proudly represented Ferguson on their real estate needs for Office and Industrial projects throughout the Western United States. Please click here to see our One Minute Case Study. 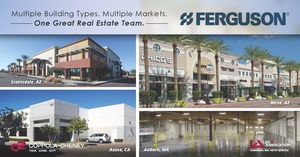 “ELECTRONICS are like drugs. You can buy them for $1 and sell them for $40,” says Jordi Muñoz, a 27-year-old Mexican entrepreneur. People in Tijuana, where he makes small, insectlike drones (pilotless aircrafts) for civilian use, would probably prefer he used a different metaphor: the city is trying to put its narcotic reputation behind it. But Mr. Muñoz feels free to say what he likes, because he has found the holy grail for exporters in Northern Mexico. He has brought inventive flair, not just deft fingerwork, to the process of making things.

Mr. Muñoz’s drone-producing plant is a maquiladora, a factory that enjoys special tax breaks. When Mexico set up the first maquiladoras half a century ago, they were sweatshops that simply bolted or stitched together imported parts, then exported the assembled product north across the border to the United States. America got cheap goods; Mexico got jobs and export revenues. Now, with competition growing from other low-cost locations, and with the government cutting some of their tax breaks, the maquiladoras are having to step up their efforts to become innovative.On October 18th the lower house of Mexico’s Congress approved President Enrique Peña Nieto’s proposal to sweep away a range of deductions and allowances that the maquiladoras enjoy. In general, Mexico collects less tax than other middle-income countries, and the government is striving to raise more revenues to improve its lamentable public services. But the maquiladoras already face stiff competition from other countries offering juicy tax breaks to manufacturers: KPMG, an accounting firm, last year rated Mexico worse than five of its main rivals in terms of tax competitiveness. Accountants at another firm, Deloitte, reckon the reforms, if passed by the upper house in the coming days, will raise the maquiladoras’ effective income-tax rate from 17.5% to at least 30%.

Over the years the maquiladoras have already lost much basic work, such as stitching together fabrics, to cheaper places in Asia, like Bangladesh. But more recently, rising pay in Chinese factories has made Mexico look an attractive location once more. According to the maquiladoras’ industry association, their exports and foreign investment each grew by more than 50% between 2009 and 2012, to $196 billion and $7.4 billion respectively. Employment, having fallen sharply in the wake of the global financial crisis, rebounded by 25% to just over 2m, slightly above the average for 2007-08. Carmakers, in particular, have been investing heavily in Mexico in response to a recovery in sales across the border in the United States.

The lure of cheaper shores
However, the tax rise risks prompting a fresh wave of departures to cheaper shores: even impoverished Haiti is now touting itself as a hub for low-cost assembly. So the maquiladoras are having to up their game, moving into more sophisticated types of manufacturing and doing more product design. On the first score, there has been some progress: much of the stitching done in Tijuana these days is not of T-shirts but of finicky medical devices such as stents, made of fine pig tissue. The aim of Mr. Muñoz’s company and others like it is to go a step further and to get involved in design and development.

If they succeed, they stand to gain some of the investment that American manufacturers are expected to make, as they shift work closer to home in reaction to rising costs in China. Otherwise, those firms may instead be tempted to put their new plants in American states such as Nevada and New Mexico. These may not be able to match Mexican labour costs, but they have a better-educated workforce and are offering attractive tax rates and utility costs.

Aerospace and defence companies are among those thought likely to “nearshore” some of the manufacturing currently sent to China. The maquiladora zone near Tijuana already has more than 50 firms in these industries, and it is here that the efforts to become more innovative are most visible. The Tijuana plant of Zodiac Aerospace, a French company, makes aircraft interiors. Downstairs, nimble-fingered women glue window-frames onto interior panels, and technicians operate machines that cut, stamp and weld metal parts. But upstairs, young engineers are hunched over computers. One is designing from scratch a netting system for planes’ overhead lockers, to stop luggage shifting during flights. He has proudly attached a note saying “Made in Mexico” on his screen.

His boss, Raúl Pérez, says that product design is the next logical step for his firm—and for Mexican manufacturing in general. “It hasn’t been easy,” he admits. Mexican universities and colleges tend to produce engineers expert in industrial process rather than products; they are good at making production lines more efficient, but not at inventing what goes on them. So Zodiac, which used to train recruits in-house, now sends its staff into universities to teach, and helps design courses that will produce engineers suitable for his industry.

Even more than other industries, aerospace needs skilled and versatile workers. Honeywell, one of the biggest aerospace firms in the region, employs 350 people in the design, engineering and testing of aircraft components in Mexicali, the capital of Tijuana’s home state of Baja California. But on a recent visit, its boss, David Cote, told reporters the talent pool lagged other potential aerospace hubs such as eastern Europe. He said Mexico needed more multi-skilled engineers able to work in mechanics, electronics and software.

Another drawback for the maquiladoras is that they have not developed local suppliers: less than 5% of their inputs are sourced within Mexico. Aerospace is a particularly demanding field because safety standards require a high degree of certification for all the parts that go into an aircraft; and suppliers making components for defence equipment are subject to strict security requirements.

To become a plausible aerospace “cluster”, and attract more investment from the world’s top manufacturers, the maquiladoras around Tijuana need to bolster the local supply chain, as well as produce more engineers capable of product design. For decades, low costs have made the maquiladoras one of the two main pillars of Mexico’s exports, second only to oil. From now on, creativity will be a better way of beating the competition than cost.