Across the country, the hottest markets have been those with a tech/startup employment driver. Other growth markets were locations with oil, but those are now mostly gone. Dead. This cycle, most markets are growing based on their ability to attract tech companies and startups. In Arizona, for the first time ever, this has been a large part of our net absorption over the past few years. With limited homebuilding, we are creating a diversified economy that has been discussed for decades. Below is an interesting article from 42 floors, a startup firm that leases small spaces in the bay area. I find it ironic that Landlords in that market are snubbing startup companies in their buildings for a number of reasons including: –Lack of credit or even a way to evaluate their prospects for success.–Sublease of a sublease—these companies grow and move pretty quick if they are successful.–Diversification—nice problem to have in San Francisco, but this is not normal across the US.

Funny, but we don’t have those issues here in Phoenix. First class problems indeed.

P.S. My partner, Andrew, and I along with another team were interviewed by Globe St.com about cross-generational collaboration within Commercial Real Estate. Here is a link to the brief video filmed at the SIOR World Conference in Scottsdale, AZ. I think it turned out interesting. 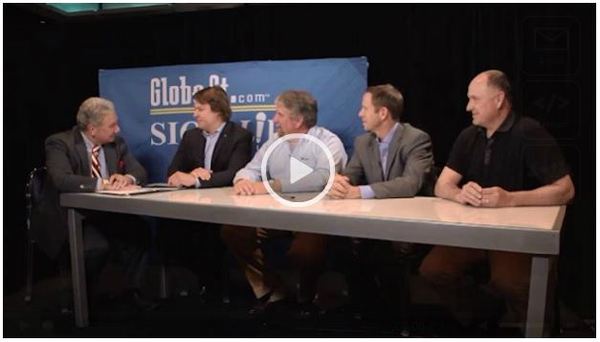 Landlords are trying not to rent to startups…

There is a funny dynamic going on in the San Francisco office market. Landlords are thrilled. The strength of the startup economy and the migration of startups from the Peninsula to San Francisco have led to the lowest vacancy rates ever and tremendous increases in price per square foot. The 42Floors research team contacted Garrick Brown, Vice President of Research at commercial real estate brokerage DTZ.   Check out the crazy rise in prices and corresponding drop in vacancy rates. 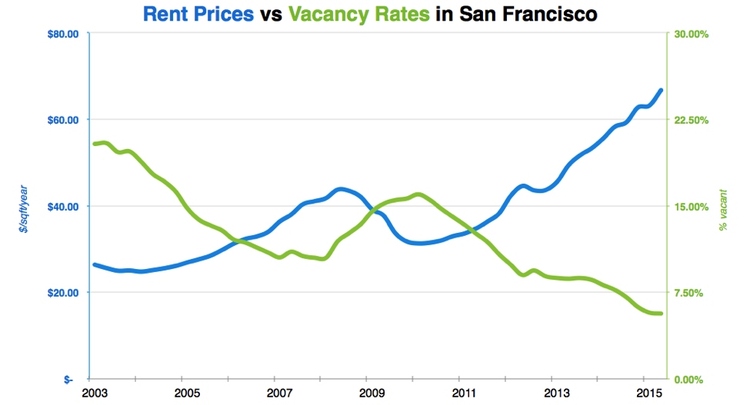 Because of this incredible demand for office space and the resulting low vacancy rates, landlords have been able to push rents higher and higher, which has allowed them to take tremendous amounts of money off the table as well as continue to invest in their assets. So why do you still hear of startups struggling to get their offers accepted by a landlord? To the casual observer you may just believe that it is a tight market and the competition is fierce, but actually there is more going on.

Many landlords (though certainly not all) are trying as hard as they can to get non-startup tenants right now. We at 42Floors recently experienced this firsthand when we were searching for our new office space.

So our 42floors research team started digging and we found that there are actually a whole bunch of reasons landlords are avoiding startups right now, even though they’re grateful for having them as current tenants in their buildings.  Here’s what we learned:

Why Landlords Don’t Want to Lease to Any More Startups

They want a balanced portfolio.

This is the most common response we’ve heard from landlords. Landlords look at their tenants as a portfolio of revenue streams and risks. Diversifying that portfolio across their buildings means that they want leases that end at different dates so that a building never goes a hundred percent empty. And they want varied credit risks that are uncorrelated from each other. This is where it hits startups really hard.

When a landlord already has a large percentage of their lease revenue coming from startups, they look to diversify it with non-startup leases under the assumption that if the startup economy goes south, it will take many of the startups with it. Many of the landlords remember back to the dot com bust. Back then, it was law firms, architecture firms and other slower growth, but profitable companies that kept the dollars flowing when the startup offices went vacant.

If you’re a startup putting an offer for a space in which a non-startup is competing on even remotely similar terms, the landlord that is over-weighted with startup leases will likely choose what is not necessarily a safer bet, but is certainly a different bet.

Landlords have almost no tools to evaluate a startup’s credit risk.

Here in San Francisco, the startup capital of the world, even a full decade after the startups moved from Silicon Valley to San Francisco, landlords are still struggling to evaluate the credit risk of a startup. The standard tool of choice for all landlords is to read a potential tenant’s financial statements. When you read the financial statement of the average startup, it’s not pretty. Even a relatively low burning startup still looks downright scary to a landlord – costs exceeding revenue, balance sheet dwindling down, etc.

I recently had a landlord ask me about one of the highest profile unicorn startups in the city, wanting to know if it was a reasonable credit risk for one of his buildings. As I tried to explain that their costs were so high because of their tremendous growth rate, this landlord’s eyes just glazed over. He eventually declined the lease offer and picked a slower growing (but traditionally profitable) energy company.

Landlords don’t want to get in the startup evaluation business. While they do like the prestige of a famous startup and what it may bring to the environment of their building, they’re mostly just afraid of the company failing in the next 5 years.

Most lease terms are longer than the current financial runway of a startup.

Scan our list of office leases. You’ll see that most are pushing five years on anything over 2,500 square feet right now. Landlords are simply taking advantage of the fact that it’s a tight market and they can push for longer terms even if it’s not what the tenant wants. Even the best funded startup almost never has a five-year runway.

While more an established profitable company may have a much smaller balance sheets than a well funded startup, it can show an infinite runway.

Startups that do well may have to lease a space for 5 years, only to move out after only nine months because of their growth. To the startup this is fantastic news, but to the landlord it’s the beginning of an annoying sublease process as they are constantly spending money on their lawyers to approve each sublease.

Our last office was leased to MoPub, which then had the lease taken over by Twitter following their acquisition, who then subleased it to us. We then sub-subleased half the space to Big Commerce, who grew out of it in 6 months and sub-sub-subleased it to another company, which split it with one other startup.

At one point, we needed to change something. It required coordination of 5 signatories of 5 different companies, each counseled by their own broker and lawyer.

I’m actually stunned how similar landlord opinions are in this regard. This little insight has spread through the landlords and brokerage market with incredible consistency: Most economic cycles are 7 to 10 years long.  In 2018, it will have been 10 years since the last big economic dip. So simply by the law of averages, they’re planning their office terms assuming there will be some big downturn in 2018 and they don’t want to have startups that are dependent on future fundraising in their spaces when it hits.

In response to landlords being squeamish about startups’ risk, some startups are using their venture capital backed balance sheets to offer large security deposits. They are basically saying, “Look, I know you don’t trust my long term credit, but you’ll have so much of my money in your bank account that even if I do default you’ve got plenty of money to cover any vacancy period.”

But, while a very large security deposit seems like it should calm those fears, most landlords, especially those who are professional asset managers, are trying to avoid problematic tenant situations, not just decrease the financial risk of the problem.

They know from experience that when a tenant starts to struggle to pay their rent, they begin negotiating with their landlord to give back some or all of their square footage early. If, as a landlord, you believe that the market will continue to go up then this is not such a bad thing because you may be getting space back that you can then re-lease at a higher price point. Landlords in this case can even double-dip by charging the outgoing tenant a penalty while simultaneously bringing in a new tenant at a higher price.

However, as a landlord, if you believe that we’re near the top of the market (as most landlords in San Francisco do) then your expectation is that in 2, 3 or 4 years, when tenants want to do a renegotiation, you’ll have to fill that space with a tenant at a lower price. And if that tenant signs on for a long term lease, then the landlord just locked in that lower price.

All of this hand wringing is the type of issue that the landlords are trying their hardest to avoid. What they want is to lock in these high prices that startups created and then pick non-startup tenants who can pay them. It’s actually quite brilliant.

So what’s a startup to do? (Call Craig Coppola and relocate to Phoenix—Ok Craig put this in.  Just checking to see who actually reads my narrative). The reality is the high price of commercial real estate is the inevitable flip side of the low cost of capital. If you want to be a San Francisco startup, you’re going to pay up for office space. You’re going to be in a competitive market with space going usually in days, but often before it even hits the market. And you’re going to be stuck accepting longer term leases; and that’s if you can successfully win the tenant selection process.

Speaking of, winning the tenant selection process is one of the most over-looked reasons to work with a great broker.  Landlords often trust the judgement of the tenant rep over their ability to analyze the risk of the tenant.  When a tenant rep and with a long-term relationship pitches your company as a worthy tenant, it goes a long way to helping ease the concerns of the landlord.

We’re also starting to see more startups fill-in in the ancillary areas outside of SoMA like the Mission, Mid Market and North of Market. We’re starting to see a few make the jump to Oakland where space requirements doubled last year. And we’re seeing a large rise in the sublease market as there are more and more startups with five-year leases that only stay for a-year-and-a-half.