“Messy” is right.  Below is an article outlining the conversations we are having 5 times a day right now with our clients. How do we come back to work and what are the rules, office space layouts, and long-term consequences of allowing everyone to partially work from home?

Here is what we are telling our clients:

—There is no right answer.  We have to get inside the company, the culture, the current office space layout, the remaining term of the lease and many more critical components to make a decision.

–We are spending way more time talking about business strategy than ever.  Why? Because the strategy and the execution is critical to the decisions being made on the office space.

–The war for talent is real.  It’s here.  It’s not going away. Read this to see how competitive the market is.

Your office space, your furniture, and the feeling people get when they walk the space is more critical now than ever before in the last 40 years.  Make sure it fits who you are hiring and the culture you want.

We are happy to talk to you and your team if you need guidance or simply want to make sure you have a sound plan for navigating this messiness.

If You Thought Working From Home Was Messy, Here Comes Hybrid Work 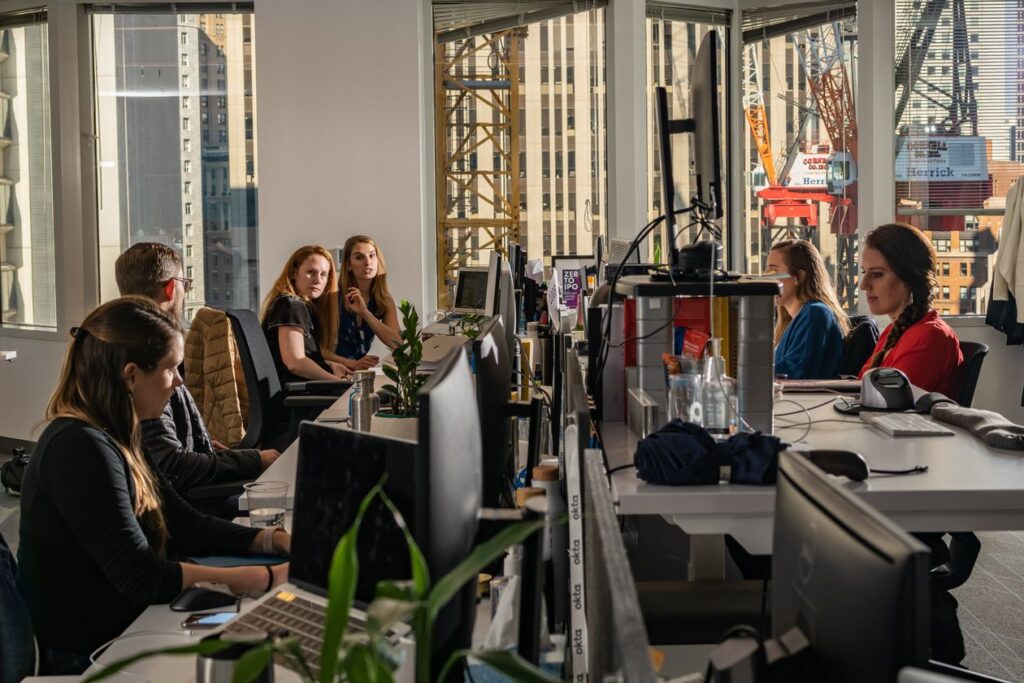 Tech-company employees working at their desks in San Francisco in October 2019, a few months before the Covid-19 pandemic transformed office life. PHOTO: KELSEY MCCLELLAN FOR THE WALL STREET JOURNAL

It took months for bosses and employees to adjust to working remotely in the pandemic. The next era of work might be even more messy.

Companies are laying down new rules and setting expectations for hybrid work as some workers come back in and others remain out of office. At JPMorgan Chase JPM +0.65% & Co., employees on some teams can schedule work-from-home days, but not on Mondays or Fridays. At Salesforce.com Inc. offices that have reopened, Thursdays are proving to be the most popular in-office day, creating high demand for meeting rooms and collaboration spaces, and prompting the company to rethink its office design.

Executives at PricewaterhouseCoopers LLP have voiced worries that workers who stay remote could wind up as second-class corporate citizens, falling behind in promotions and pay, so the company plans to track rates of advancement for office-based and remote staff in an effort to make sure nobody lags behind.

After months of discussions, big employers from Humana Inc. in Louisville, Ky., to Nike Inc. near Portland, Ore., say they are cementing plans to return to corporate complexes after Labor Day—in some cases relaxing capacity restrictions—while also promising employees some measure of flexibility in where they work.

Covid-19 isn’t the only factor weighing on workplaces. Many managers now worry about a brain drain from their ranks. Some companies that are hiring say they can’t find knowledge workers willing to come into an office five days a week, according to chief executives, human-resource chiefs and recruiters.

OnSolve LLC, a software company based in Alpharetta, Ga., is hiring for about 90 new positions this year. Chief Executive Mark Herrington says he is eager for office life to return to normal, but a number of applicants, particularly in technical and engineering roles, have insisted on having the option to work from home at least some of the time.

“It’s become really sort of a requirement if you’re looking for top talent,” Mr. Herrington says. “Those folks are pretty much saying, ‘Hey, if I can’t have a bit of a hybrid work environment, then I’m probably not going to be interested.’”

Research has shown that most employees prefer some form of flexibility in where they work. An upcoming survey of 9,000 workers by Accenture PLC found 83% of respondents viewed a hybrid workplace as optimal, which means companies need to figure out the new mores of work, and fast.

Sabre Corp. , the travel-technology company that powers major hotel and airline booking systems, has slimmed down to one building from a four-building campus in a suburb of Dallas. Sabre says it plans to bring about 25% of office workers back on site at least three days a week.

The company surveyed its thousands of workers about their preferences and talked extensively with leaders about what worked—and what didn’t—over the past year. The result: Roughly 25% of Sabre’s 7,500-person staff will likely resume a standard office workweek, says Shawn Williams, Sabre’s chief people officer. About 30%, or 2,250 people, will stay remote, and the remaining 45% will come into the office to collaborate with peers one or two days a week.

Sorting out who falls into each category takes some work, Mr. Williams says, adding that who stays home and who comes in—and when—depends on job function and manager approval. Even Sabre executives who had assumed workers would be more engaged in an office setting came to conclude that a flexible approach better suits the new realities of employees, many of whom care for children or elderly parents, or have found a lower cost of living farther from Sabre’s headquarters.

“The workforce of the future isn’t going to come in to go crank a spreadsheet. You’ll crank a spreadsheet at home just fine,” Mr. Williams says. “You’re coming in to be able to collaborate with your team, work on projects, do brainstorming, be a part of our R&D engine.”

Tope Awotona, the founder and CEO of Calendly, an Atlanta-based company that makes scheduling software, says he is hiring in places like Georgia, Florida and Texas, and plans to give people the option to come into an office or not. He is providing staff with memberships to co-working spaces near them, so they don’t have to work from their homes if they don’t want to.

“We want to be what we call a remote-first company, but not a remote-only company,” he says. “We want to eliminate the expectation that anybody has to be in the office. All we care about is that you get your job done from anywhere, you hit your goals and you make yourself available.”

Jon Stross, a co-founder of Greenhouse Software Inc., predicts that most companies will find hybrid work difficult to navigate. Several years ago, the recruiting-software provider split some of its engineering teams between a New York office and remote locations.

“It didn’t work nearly as well” as when everybody was all remote or working together in the office, he says, adding that distributed workers complained of feeling left out while people who could meet easily in the office or for happy hour appeared to solve problems with each other in person. Greenhouse opted to run teams either fully remote or fully in offices in cities such as New York or San Francisco.

The company also says it is impossible for everybody to be in the same room all the time, so it developed norms for meetings, for example, making sure that in-office colleagues don’t have side conversations that those dialing in can’t hear, Mr. Stross says.