What would you do if you had an unlimited budget to improve your company’s next office renovation?  Below is a great article detailing what some tech giants are doing to their interior design to keep their employees happy, productive and in the office.

One simple takeaway is that these companies are doing THE most innovative and comprehensive buildout you can possibly build.  AND they are applying everything in the real world.  We find that our clients, regardless of industry, are watching and observing all these changes and then incorporating as many of their favorite features as they can afford into their own space. 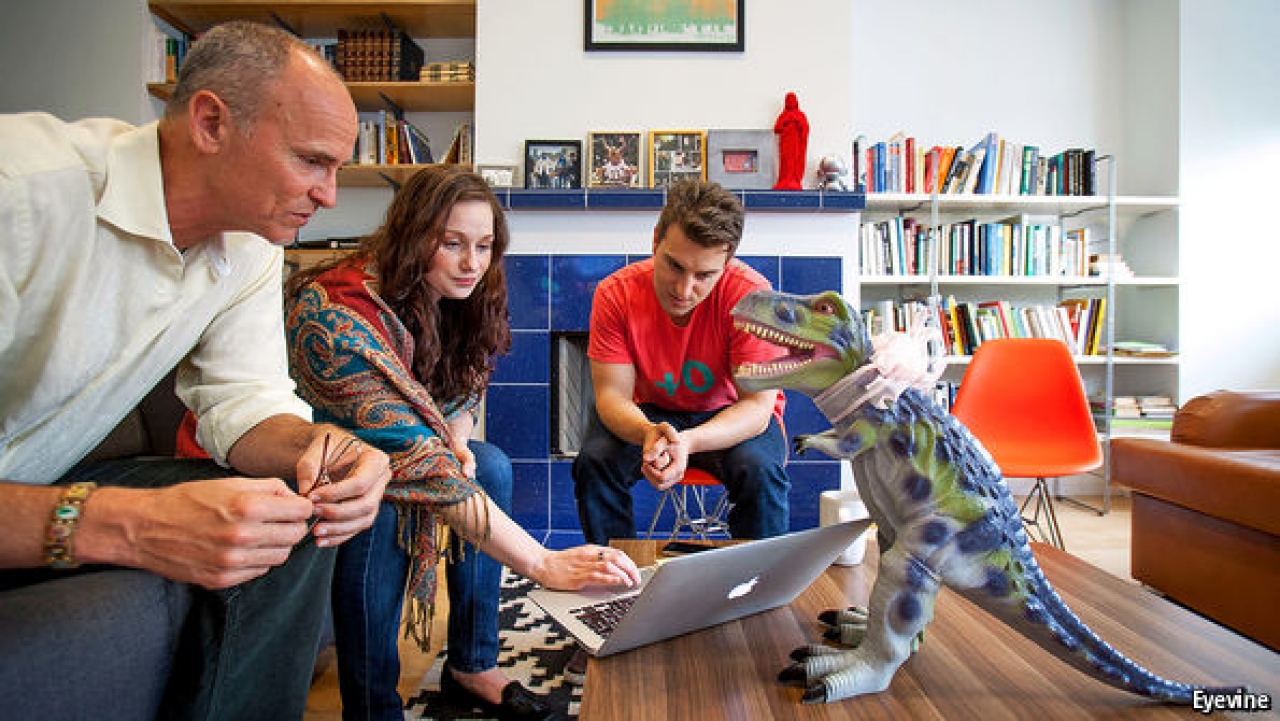 FROM the 62nd floor of Salesforce Tower, 920 feet above the ground, San Francisco’s monuments look piddling. The Bay Bridge, Coit Tower and Palace of Fine Arts are dwarfed by the steel-and-glass headquarters that will house the software company when it is completed later this year. Subtle it is not. Salesforce plans to put on a light show every night; its new building will be visible from up to 30 miles away.

It is not the only technology company erecting a shrine to itself. Apple’s employees have just begun moving into their new headquarters in Cupertino, some 70 kilometres away, which was conceived by the firm’s late founder, Steve Jobs. The four-story, circular building looks like the dial of an iPod (or a doughnut) and is the same size as the Pentagon. At a price tag of around $5bn, it will be the most expensive corporate headquarters ever constructed. Apple applied all its product perfectionism to it: the guidelines for the wood used inside it reportedly ran to 30 pages.

Throughout San Francisco and Silicon Valley, cash-rich technology firms have built or are erecting bold, futuristic headquarters that convey their brands to employees and customers. Another example is Uber, a ride-hailing company, which is hoping to recast its reputation for secrecy and rugged competitiveness by designing an entirely see-through head office. It is expected to have some interior areas, as well as a park, that will be open to the public.

The exteriors of the new buildings will attract most attention, but it is their interiors that should be watched more closely. The very newest buildings, such as Apple’s, are mostly still under wraps, but they are expected to be highly innovative in their internal layout. Some of that is because of fierce competition within the tech industry for the best engineering and other talent: firms are particularly keen to come up with attractive, productive environments. But these new office spaces will also signal how work is likely to evolve. Technology companies have already changed the way people behave in offices beyond their own industry, as a result of e-mail, online search and collaboration tools such as Slack. They are doing the same for physical spaces.

The big idea championed by the industry is the concept of working in various spaces around an office rather than at a fixed workstation. Other industries have experimented with “activity-based working”, but tech is ahead. Employees may still have an assigned desk but they are not expected to be there, and they routinely go to different places to do various tasks. There are “libraries” where they can work quietly, as well as coffee shops, cafés and outdoor spaces for meetings and phone calls. The top two floors of Salesforce Tower, for example, will be used not as corner offices for executives but as an airy lounge for employees, where they can work communally and gaze out at the views over a latté.

A fluid working environment is meant to allow for more chance encounters, which could spur new ideas and spark unexpected collaborations. Facebook’s central building is the world’s largest open-plan office, designed to encourage employees to bump into one another in its common spaces and in a nine-acre rooftop garden. Communal areas are meant to be casual and alluring. John Schoettler, head of real estate at Amazon, says he aims to make them into “living-room-like spaces”. For offices to feel like home, it helps to hire a designer with expertise in residential real-estate, says Elizabeth Pinkham of Salesforce. In common areas at the firm’s offices, there are TVs, couches and bookshelves. Framed photos of a few employees add to the effect.

The new “working at home”

For those who scoff at the creative benefits of being surrounded by pictures of Colin from accounts, there are more tangible payoffs. The lack of fixed workstations shrinks the amount of expensive real estate given to employees without leaving them feeling too squeezed. Tech firms devote around 14 square metres to each employee, around a quarter less than other industries, according to Randy Howder at Gensler, a design firm. Young workers are thought to be more productive in these varied environments, which are reminiscent of the way people study and live at university. One drawback, however, is that finding colleagues can be difficult. Employees need to locate each other through text messages and messaging apps.

Collaborative spaces can also expose generational tensions, says Louise Mozingo, an architecture professor at the University of California, Berkeley. Tech firms’ elderly employees (otherwise known as the over-40s) can struggle to adjust to moving around during the day and to the frequent disruptions that come from large, open-plan offices. Many of Facebook’s employees do not like their office because it is noisy, and some Apple employees are hesitant to move into their new building for the same reason. Plenty also balk at the massive distances they will need to walk.

That may not be the only thing to cause employees concern. Tech firms are increasingly keen to use their own products in their headquarters. Jensen Huang, the chief executive of Nvidia, a chipmaking firm whose graphics processing units are widely used in artificial-intelligence programmes, says his firm plans to introduce facial recognition for entry into its new headquarters, due to open later this year.

Nvidia will also install cameras to recognise what food people are taking from the cafeteria and charge them accordingly, eliminating the need for a queue and cashier. A self-driving shuttle will eventually zip between its various buildings. And Nvidia’s own AI will monitor when employees arrive and leave, with the ostensible aim of adjusting the building’s heating and cooling systems.

The data that firms can collect on their employees’ whereabouts and activities are bound to become ever more detailed. Another way of keeping tabs on people is through company-issued mobile phones. “Every employee has their own tracking device,” observes Mr Howder at Gensler. “Technology firms will sooner or later take advantage of that.”

Few of them are willing to share details of their future plans because of concerns about employees’ privacy. However, some of their contractors signal what sort of innovations may be in the pipeline. Office-furniture makers, for example, are experimenting with putting sensors in desks and chairs, so that firms will be better able to monitor when workers are there.

Such data could be anonymised to allay privacy concerns. They could also save electricity or help people find an empty room to hold a meeting. But it is not hard to imagine how such data could create a culture of surveillance, where employees feel constantly monitored. “Technology firms could be an indicator of what will happen with privacy in offices more generally,” says David Benjamin of Autodesk, a company that sells software to architects, among other clients.

A less controversial trend is for unusual office interiors. These can distinguish companies in the minds of their employees, act as a recruiting tool and also give staff a reason to come into the office rather than work from home. For companies that do not ship a physical product, such offices can serve as important daily reminders of culture and purpose.

Last year LinkedIn, a professional social network, for example, opened a new building in San Francisco that is full of space set aside for networking, and that includes a “silent disco”, where people can dance to music with headphones on. Instead of offering generic meeting rooms with portentous names, Airbnb, a tech firm that lets people rent out their homes, has designed each of its meeting spaces after one of its rental listings, such as a Bedouin tent from Morocco. It also has a meeting room (pictured above) that is an exact replica of the rental apartment where the founders lived when they came up with the idea for Airbnb. Every detail, including the statue of Jesus in red velvet on top of the fireplace, is accurate, says Joe Gebbia, one of the company’s founders.

Nvidia is obsessed with triangles, the basic element of computer graphics used to create lifelike scenes in video games and movies. Its new headquarters, which cost $370m, is shaped like one (see picture), and its interior is full of them. Everything, from the skylights to the benches in the lobby, is triangular. “At this point I’m kind of over the triangle shape, because we took that theme and beat it to death,” admits John O’Brien, the company’s head of real estate, who pointedly vetoed a colleague’s recent suggestion to offer triangle-shaped water bottles in the cafeteria. 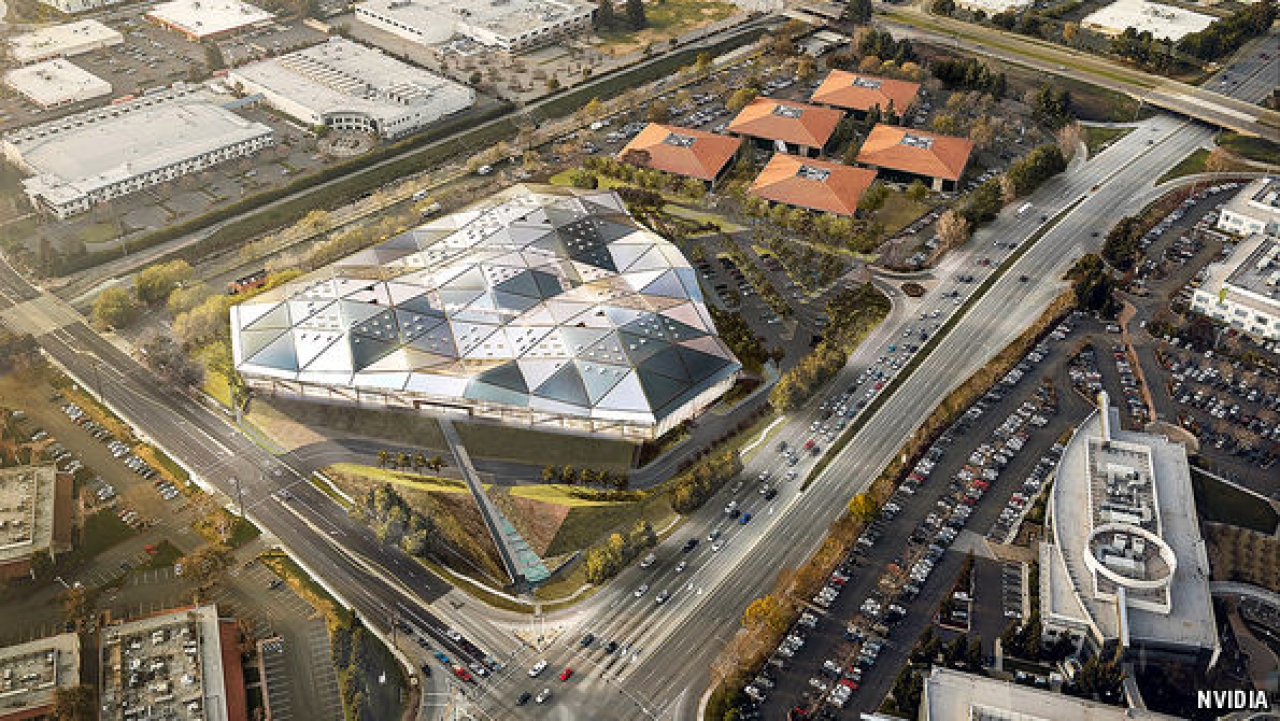 Such workspaces remind staff that they are choosing not just an employer but a way of life. In the tech bubble of the late 1990s companies disrupted the workplace by offering foosball tables, nap pods, blow-up castles and free lunches. Now the emphasis is on amenities that help employees save time. Larger firms, including Facebook, Alphabet and LinkedIn, offer their staff something akin to the services used by the extremely wealthy, helping employees to find places to live, adopt pets and the like. Some large tech groups offer on-site health care.

The effect of all this is that the typical office at a technology firm is becoming a prosperous, self-contained village. Employees have fewer reasons than ever to leave. With the spare cash they can throw at their employees, tech giants have vastly raised the bar for other kinds of company, which also want to recruit clever engineers and techies for their projects.

Other industries would be wise to take time to watch how tech firms are structuring their work environments. There is certainly a chance of a backlash against those that use their products to watch employees too closely. Workers may like free lunches and other perks associated with the tech business, but probably not enough to surrender their privacy entirely.