Day Two of our Five-Day Series–In the early 2000’s, before the dot com bubble burst, hundreds of millions of dollars were invested and lost by startup companies trying to turn the commercial brokerage process into an automated endeavor. The theory was, and still is, that real estate brokerage can be automated like the travel agent business and stock brokerage. Hundreds of millions of dollars are paid each year to brokerage companies, and any company that could actually be a solution would be a huge moneymaker. The alluring promise is lower rents to tenants and increased profits to landlords. Every up cycle, technology investors continue to try. This cycle, in general, the efforts seem to me to be more modest, nibbling around the edges.

Below is an article on the residential brokerage company Redfin that is VC backed and trying to be the hi-tech brokerage solution. As Mark Sklar, Co-Founder of DMB, said years ago, the real estate industry is a cottage industry. It needs local talent to implement. Redfin still needs and uses people to implement their solution. This has caused investors to balk and the company to grow much slower than other hi-tech investments. I like the focus on technology, but taking sales people and putting them on salary is not going to garner the top producers. In 1991, eight other guys and I started Lee & Associates Arizona. You needed to be a hunter, then and now. Getting business, especially repeat business, requires only the best. Salary-based brokerage (used for a long time but ultimately abandoned by The Staubach Company which is now Jones Lang LaSalle) has never lasted in our world. The brokerage business is just too hard to not be highly compensated on a success basis. Redfin pays 50% salary and the balance is commissions. It has taken the company eight years to get to $100 million in revenue while some of the 100% commission companies did it much faster. AND Redfin has yet to turn a profit.

Scroll down to see my highlights and the problems the Venture Capitalist community has with “people” businesses. Wednesday and Thursday, I will dive into 12 commercial hi-tech companies that are trying to take market share in different areas of our business. 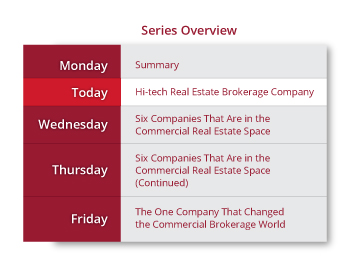 “I used to think I was this made man,” says entrepreneur Glenn Kelman. “That’s what they tell you after you take a company public.”

In 1996 Mr. Kelman co-founded Plumtree, a business-software firm that went public in 2002. After that, he assumed that his next idea was as good as paid for.

“Whatever I thought of, they’d fund it,” he says.

Then, in 2006, Mr. Kelman became chief executive of a real-estate startup, Redfin Corp. 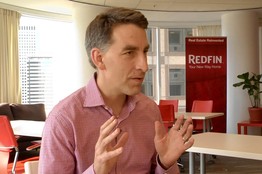 Redfin sounds like it would be catnip for technology investors. The company aims to overhaul how people buy and sell houses, using software and data to improve real-estate agents’ customer service. Real estate is an opaque, expensive insider’s game—exactly the kind of business that is ripe for getting blown up by a less-expensive, more-convenient Web-powered service.

“We wanted to change the whole thing in the consumers’ favor,” Mr. Kelman says, his voice straining with a revolutionary’s passion. “We wanted you to have an agent who was on your side, who used technology the whole way through the process and who charged half the price.”

But whenever Mr. Kelman shopped his plan in Silicon Valley, venture capitalists looked at him funny. He raised millions of dollars, but the money came fitfully, often at lower valuations than he expected.

Eventually Mr. Kelman realized the problem. Like Soylent Green, Redfin is made of people—sales staff and customer-service representatives.

To tech investors, companies that depend on such people are old-fashioned. People are unpredictable and hard to manage. They are costly to hire and train, and their path to success is difficult to set into an algorithm. People don’t scale.

Yet Redfin is one of a handful of startups showing that people can make a big difference. Mr. Kelman believes that improving the real-estate business takes more than just better code. It takes better people, specifically, better real-estate agents. Consequently, Redfin has hired hundreds of agents on staff, people to whom it pays salaries, benefits and on whose work the company depends.

After years of slow growth, Redfin is poised to hit it big. It’s on track to book $100 million in revenue—and turn a profit—next year.

And its path suggests that businesses that try to improve workers—and not just code—can be better for customers and, in the long run, better for the bottom line.

Like Zillow Inc. and Trulia Inc., Redfin is partly a website that helps you find houses for sale. But unlike those companies, which make money through ads placed by traditional brokers, Redfin is a full-service brokerage. After you find your dream house on its site, Redfin makes money when you sign up with one of its agents to guide you through the home-buying process. (Its agents sell houses, too.)

First, it improves service. If you’re touring a neighborhood and see a house for sale, you can order up a Redfin agent to drive over to show you the property quickly. In the company’s most-established markets, Seattle, for instance, the agent can be at your service within an hour. (It takes longer in Redfin’s newer markets, like Dallas). This works thanks to a blend of technology and management. Just as the Uber online ride service maps its drivers, Redfin keeps track of its agents’ calendars and real-time locations. Unlike a traditional real-estate brokerage—in which agents essentially are contractors of a brand, not employees—Redfin’s agents are salaried workers. The company can tell them where to go and what to do.

Redfin helps soothe other home-buying frustrations as well. Redfin compiles detailed histories on competing brokerages’ pricing strategies, strengthening Redfin agents’ negotiating prowess. Redfin also conducts most of the home-buying process online, reducing paperwork. And if you’re selling your house, Redfin can test offer prices on the Web, helping you to home in on the optimal price.

The biggest opportunity is price. Mr. Kelman says the incentives of traditional real-estate agents are misaligned with those of customers. If you’re selling your house, your agent, who gets paid on commission, will prefer that you take a lowball offer over no offer. If you’re buying, your agent will want you to bid higher than you might otherwise want—or need—to pay. Economists call this the Principal-Agent Problem, and it has proved stubbornly intractable in real estate.

Mr. Kelman says Redfin has a solution. About half a typical Redfin agent’s pay comes through salary. The rest comes through commissions. But crucially, commissions are linked to detailed reviews that Redfin customers complete after sales. The reviews are posted online and affect each agent’s future business. Your agent always has an incentive to please you. If pushing a client to close a deal will produce a bad review, the agent would rather not close.

Redfin is still tiny. In its most-established locations, it has about 3% or 4% of the market. In bigger, newer markets, it seems nearly nonexistent.

Mr. Kelman concedes that his people-dependent model has slowed Redfin’s growth. But he sees the prospect of long-term returns. “After we hit a certain threshold in the market, our share begins to accelerate,” he says. In other words, over time, better service begins to pay off.

“Most of Silicon Valley isn’t that patient.”