These are huge differences compared to US-based companies (other than Salesforce HQ in San Francisco – click here to read my narrative on this topic).  The comparisons open up lots of new directions to analyze.

P.S. I was recently on the 7 Rules Podcast with Nick Raithel.  We discussed my 7 Rules for Real Estate Investing.  Great podcast to focus you on the important issues when investing in Commercial Real Estate.   Click here to listen.

Inside Tencent’s new $599 million Shenzhen headquarters
The company’s headquarters flips the sprawling tech campus on its side.
BY YASMIN GAGNE 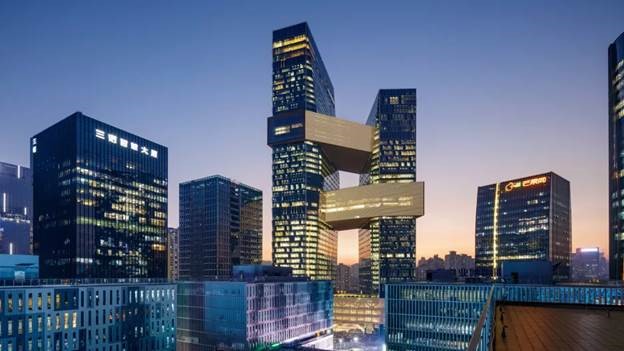 When it comes to their headquarters, American tech companies tend to favor sprawling campuses with pathways, pantries, and soccer pitches designed to foster interaction among employees across different departments. For its new, reportedly $599 million home, in Shenzhen, China, internet giant Tencent tasked the architecture firm NBBJ with turning this model on its side and imbuing a 50-story skyscraper with the same collegiate-style atmosphere for 12,000 employees. Step one, says lead designer Jonathan Ward, was splitting the building into two towers and connecting them by three bridges, “so there is a conversation happening between them.” Below, a look at how the firm brought new energy—and a green sensibility—to the corporate high-rise.

1. LOCATION
The building is in a burgeoning tech district next to Shenzhen University, on the city’s far west side—an area intended to be China’s answer to Silicon Valley. Constructed on land reclaimed from the sea, the towers were built to comply with China’s Sponge City initiative, which tackles runoff pollution and flooding by making urban landscapes more capable of filtering and holding water.

2. THE PLAZA AND ROOFTOP GARDENS
The building’s one-acre plaza is covered in permeable ceramic bricks made from recycled materials that filter rainwater as it drains into the ground. This absorbent layer—along with gardens atop the roofs and bridges—has more than doubled the building’s water-retention rate compared with traditional construction techniques.

3. FIRST BRIDGE
Nicknamed the “brain” of the building, the top bridge houses Tencent University, where employees can take classes to brush up on skills such as coding. Several conference rooms are located here, as well as space for after-work activities, such as guitar and English lessons. 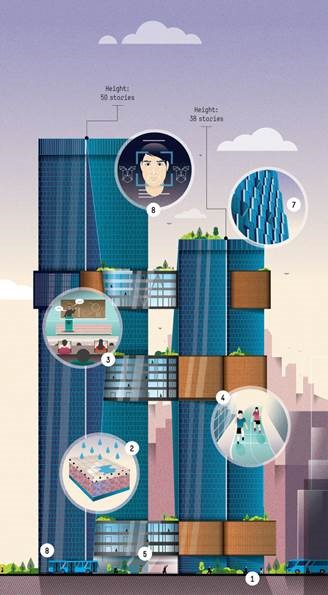 5. THIRD BRIDGE
The lowest link contains a museum about the history of Tencent, two levels of cafeteria space, and a 500-person auditorium.

6. BUS STATION
Tencent buses pick up employees throughout the city and drop them off in an underground terminal below the building. Escalators rise up to plaza level, allowing natural light to filter in.

7. FACADE
The glazed, self-shading exterior regulates how much sunlight and heat penetrate the building, reducing the need for air-conditioning. NBBJ estimates that the building uses 40% less energy than a typical office tower.

8. LOBBY
Tencent is developing a building-wide internet-of-things system to help automate heating, air-conditioning, and security. Already, facial-recognition technology identifies employees and allows them to access certain floors. Smart rooms within the building can adjust their temperature based on how many people are in them. Robot guides in the lobby show people to bathrooms and other facilities.

SHENZHEN, China—Tech giant Tencent Holdings Ltd.’s new twin-tower headquarters in this southern megacity offers a glimpse into the future of office life, a future where China is pulling ahead in the race for innovative workspaces.

Tencent—a company best known for developing WeChat, the social-networking mobile app with over a billion users—began moving employees into its centerpiece high-rises, the Seafront Towers, in October to prepare for future expansion.

Cammy Liu, a 24-year-old Tencent secretary, enjoys the new home base’s state-of-the-art benefits. A camera scans her face using facial-recognition technology so she can enter the elevator and go up to her floor. She can order meals via smartphone and have them delivered to her in some of the staff dining areas.

It was so convenient, “I gained five to six kilos after the move,” Ms. Liu said.

Tencent declined to disclose its total investment in the new headquarters, but analysts estimate construction costs at around $600 million. 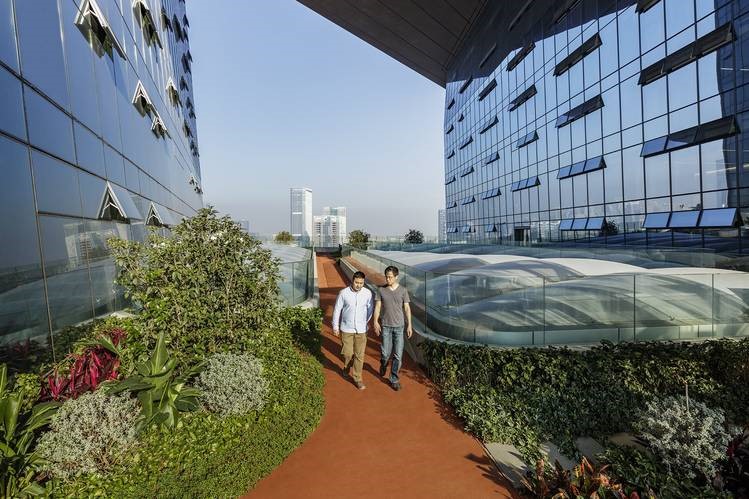 The complex, with a shared lobby connecting the two towers, is among a new crop of buildings in China that reflect a growing change in corporate work culture. Chinese firms are encouraging a stronger sense of community by featuring more open gathering spaces and advancing new technologies to make office life more efficient.

Tencent, partnering with an architecture firm, envisioned a twist on the Silicon Valley-style tech office space. Instead of a flat suburban box, the headquarters is split into two vertical towers. Two midair bridges connect the towers and provide communal gathering spaces, like quads in a vertical campus.

One reason for the vertical design was that nine years ago, Tencent could buy only a small real-estate parcel in Shenzhen, which was running out of open urban land during its makeover from a small fishing village to China’s leading tech hub. The building’s design was also intended as a solution to create more mobility and flow, leading to more chance encounters among employees.

“The challenge of the high-rise building is it’s inherently anti-connection, a series of these stacked plates,” said Jonathan Ward, a Los Angeles-based design partner at architecture firm NBBJ and the lead architect for Tencent’s HQ project. “They go up in the sky and nobody can see each other. We have to rethink the high-rise building.”

Mr. Ward said cultivating a family spirit within its headquarters was a priority for Tencent in China. “I don’t see that so much in the U.S. as a fundamental driver,” he said.

On a recent visit, Tencent employees were on the bridge at the 21st floor, playing ping pong and basketball together and lining up for a rock-climbing wall. Tencent wanted the bridge to promote health and wellness and to symbolize the heart of the complex. The bridge beginning at the 34th floor includes a Tencent University training center for employees. 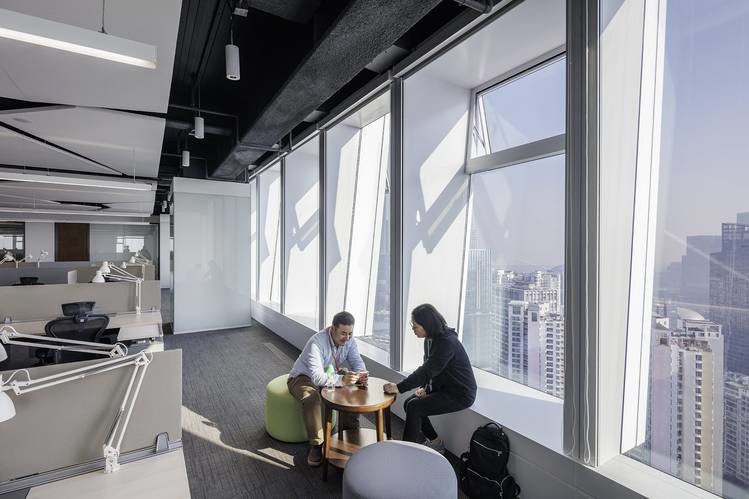 Sebastian Hill, an architect at NBBJ in Hong Kong, said open meeting spaces scattered throughout the towers encourage workers to change up their routines. About 8,000 Tencent employees moved from another building in Shenzhen to the new offices, which can handle a total of 10,000.

“The old headquarters wasn’t very big, so you had to stay at your desk to work,” Ms. Liu said. “But now there is plenty of space, lots of sofas and places to sit and work and chat with co-workers. We don’t just sit at our desk.”

“Many people in the U.S. and even more so in the EU, would see that as an invasion of privacy, but in China people really appreciate the convenience it creates,” said Jordan Kostelac, property technology director at JLL, a real-estate brokerage firm. 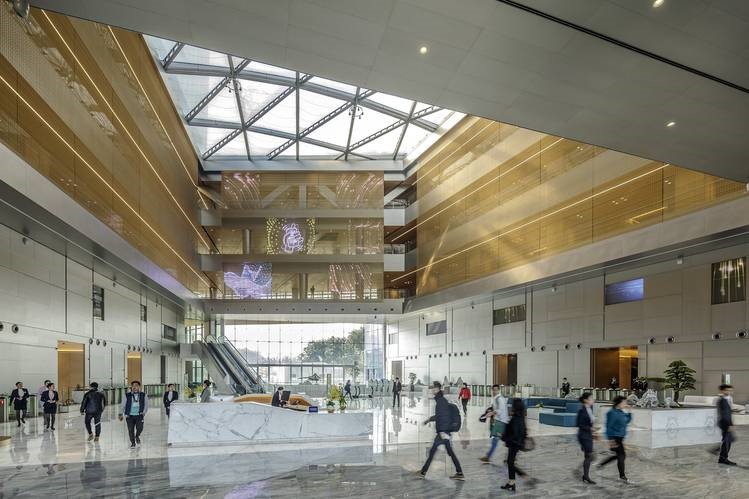 Elsewhere in Shenzhen, one of China’s largest insurers, Ping An Insurance, took inspiration for its new headquarters from the shape of New York City’s Empire State Building. The second-tallest skyscraper in China, it was completed in 2017. (China’s tallest skyscraper is the 128-story Shanghai Tower.)

“We really wanted to have a statement,” said Florence Chan, an architect at New York-based Kohn Pedersen Fox Associates, which designed the tower.

Ping An Financial Centre also employs a facial-recognition system for employees. And from about noon to 1:30 p.m. the ceiling lights dim, so employees can comfortably nap at their desks, a common practice in Chinese work culture.

In Hangzhou, a prosperous coastal Chinese city, employees at the headquarters of Ant Financial, an affiliate of Alibaba, work in open spaces referred to as Z-Space, which is meant to encourage “hierarchy-free collaborations and straightforward communications,” an Ant Financial spokesman said. Employees can book meeting rooms and receive automated alerts for package deliveries via a smartphone app.

During its building heyday starting around the Beijing Summer Olympics, China was a playground for global architects testing out whimsical showpiece designs, like the iconic China Central Television building in Beijing designed by Rem Koolhaas, which looks like a pair of entangled trousers, or the egg-shaped National Centre for the Performing Arts in Beijing.

The enthusiasm has cooled in the years since President Xi Jinping called for an end to “weird” buildings in 2014. That remark caused some architects to pre-emptively tone down designs to avoid possible government scrutiny.