This headline made me laugh: Phoenix was ranked as the least relaxing city in America, according to a recent survey. Factors such as light pollution, green spaces, and coastal proximity all weighed heavily against Phoenix in the survey, which showed the least number of respondents who get 7+ hours of sleep each night. Meanwhile, San Jose, California was ranked as the most relaxing city in the country. What is the point of this narrative?  There are tons of rankings and people trying out new ways to compare cities.

Here are the top 4 things I look for:

—Is it a growth market?  It is SO much easier to do well if the wind is at your back.  As my Dad said to me when I told him he was a great baseball coach, (My father was inducted into the Arizona Baseball Coaches Hall of Fame) “Craig, I was a great coach, then my pitcher graduated.”  I have had a great career for almost 40 years because I have lived in a great growing market.

—Pro-business?  I want the government and the community to want business to come to the market and to grow.

—Pricing reasonable?  I know personally it is very hard to run a business when your costs (employees, office space, cost of living, etc.) are simply too expensive.

—Can I get the talent I want?   There is a talent war going on across the country. Can I hire great people at a reasonable cost?

Even despite the below ranking, Phoenix has consistently been one of the fastest-growing cities in the country, with more people moving to the area over the past 2 years than almost any other city in the country. As you look for your business, consider the above questions for the markets you are contemplating.

Phoenix ranks as the least relaxing city in the U.S. 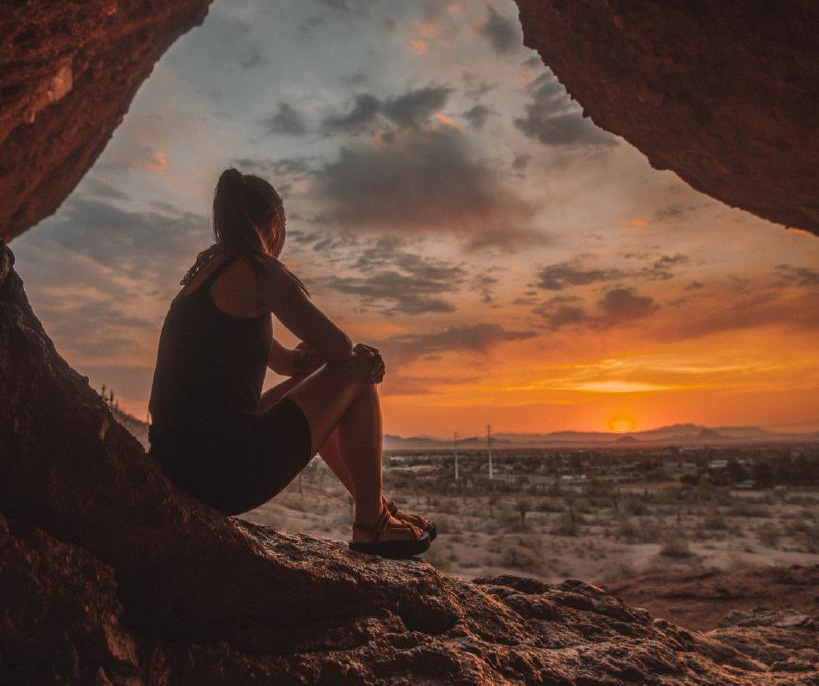 We can say with certainty that the last 18 months have been far from relaxing thanks to all of the questions that come with a pandemic. In honor of National Relaxation Day on August 15, Amerisleep decided to dive a little deeper into the theory that some cities are more on edge than others.

After doing some research into external sources, we found that four in five American adults feel that the pandemic is a significant source of stress in their life, while seven in 10 agree that their stress levels have increased throughout the pandemic period. In fact, nearly half of adults (49%) in America who took part in a study conducted by APA, reported that their behavior has changed negatively due to increased stress with some reporting physical tension, a short temper, unexpected mood swings and yelling at a loved one.

In light of this, we wanted to look into which cities Americans can add to their bucket list, when looking for relaxing vacations, or even more of a permanent move.

San Jose (CA) takes the top spot as the most relaxing city out of the 15 biggest cities in the U.S., followed by Jacksonville (FL) and Austin (TX). Meanwhile, San Antonio (TX), Dallas (TX) and Phoenix (AZ) rank as the 3 least relaxing cities.

We conducted research into both internal and external data to create the relaxation index and established which of the 15 biggest cities in the U.S. could be hailed as the most relaxing, and which were the least. Factors considered when creating the ranking were light pollution, peaceful environment, transport noise, green spaces, proximity to the coast and extreme weather.

Each city was ranked out of 15 for the six categories, with a maximum score of 90. The cities which scored the lowest out of 90 are the most relaxing. 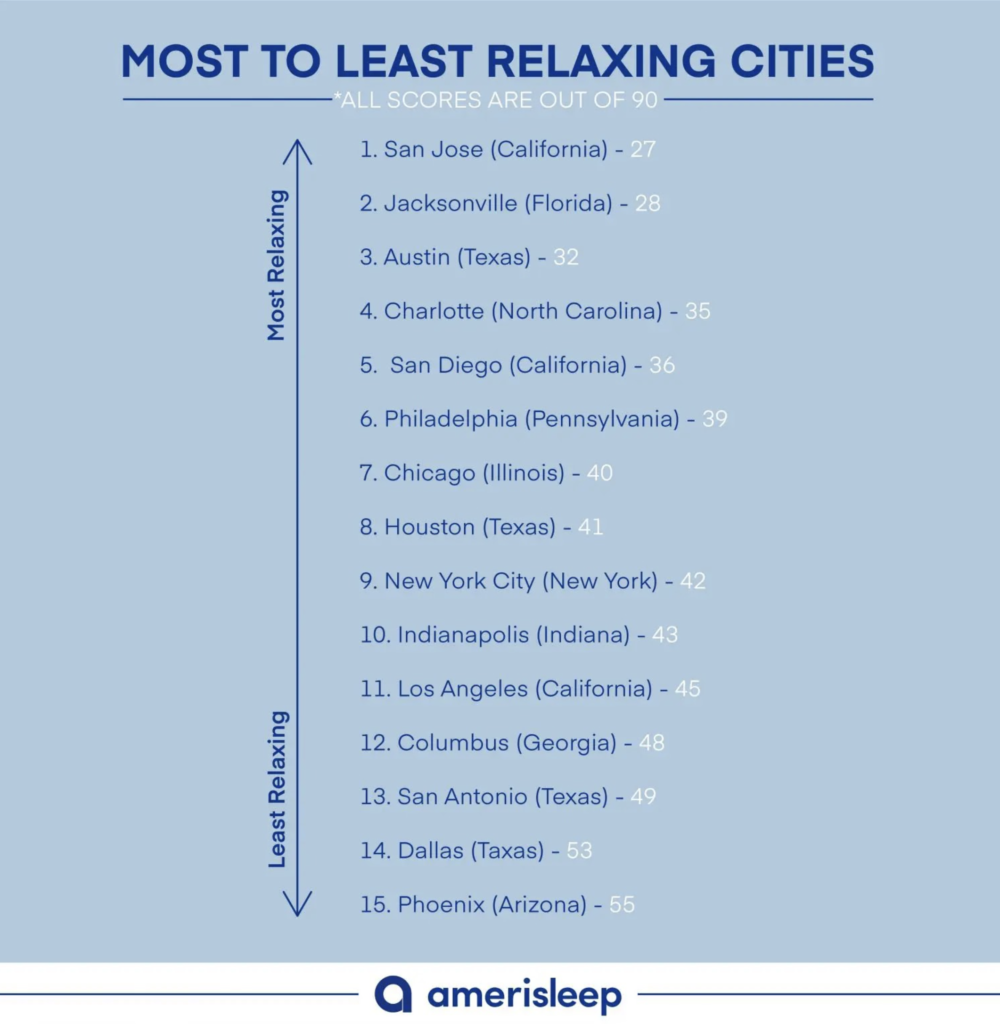 The top 3 most relaxing cities are:

This Californian city earns its place as the most relaxing city in the U.S., ranking in the top five for three of the six factors considered. San Jose ranks in first place for light pollution levels, additionally, 90% of residents in the city agree that they feel they live in a peaceful environment, placing San Jose in fourth place for this factor.

Jacksonville lands in second place on the relaxation index with impressive scores across the board! The city ranks in second place for light pollution levels, as well as sitting in third place for its proximity to an open water source. In fact, the city’s closest beach – Atlantic Beach – is just 9.78km away from the midpoint of Jacksonville. However, Jacksonville ranks lowest for its green spaces with just 217.45 sq/m per capita.

Unsurprisingly, this inland city ranks in just eleventh place for its coastal proximity, with the closest open water source – Six Mile Road – over 201km from the midpoint of the city. However, Austin’s strongest advantages in this index are its low levels of transport noise – the city ranks first for this factor – and fairly high levels of green spaces (276.7 sq/m per capita).

The 3 least relaxing cities are:

Phoenix finds itself at the bottom of the heap as the least relaxing U.S. city of the 15 considered. In fact, the city ranks in the bottom five for four of the six factors in the index – peaceful environment (14th), green spaces (13th), coastal proximity (14th), and extreme weather (11th). The only neutral factors are light pollution levels (9th) and its medium levels of transport noise.

We also wanted to delve into some of the reasons why factors such as light pollution and green spaces can impact our state of relaxation. Research suggests that the reduction of melatonin caused by exposure to light sources can lead to disrupted sleep and daytime sleepiness, causing increased irritability and mood swings. Additionally, research into the benefits of green spaces in urban areas particularly suggest that exposure to natural environments have largely relaxing effects – including lowering heart rate and lowering cortisol (stress hormone) levels.

Dallas finds itself in the penultimate position as the least relaxing US city, ranking in the bottom spot for its coastal proximity with the closest beach an unfortunate 372.66 km away. When it comes to light pollution, Dallas falls short once again in 10th place at 10600 (μcd/m2), almost double the amount in San Jose! Fortunately, a lack of extreme weather in the city seems to save it from the bottom spot, with just 43 degrees farenheit difference between its hottest and coldest temperatures.

This southwestern city ranks as the third least relaxing city out of the 15 considered for this index. San Antonio ranks poorly for its high levels of transport noise as well as its coastal proximity (the nearest open water source is 194.17 km away from the midpoint of the city). Despite this, nine in 10 (91%) of residents in the city agree that it is a peaceful environment to live in.